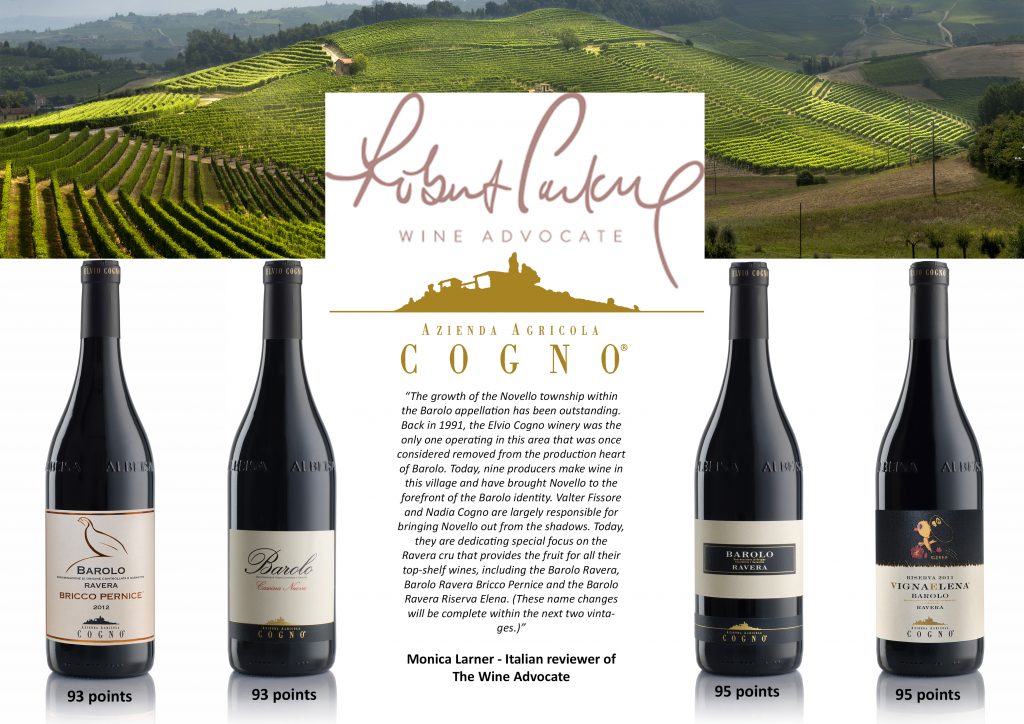 2013 Barolo Cascina Nuova – The 2013 Barolo Cascina Nuova is the most accessible of the various single-vineyard Barolos released by the Elvio Cogno winery. But this vintage is a little different. Proprietor and winemaker Valter Fissore says that 2013 reminds him of 1999 for the deeper sense of structure and depth demonstrated by Nebbiolo this growing cycle. The vines are young, averaging 15 years old, and the wine sees a 40-day maceration period with submerged caps. As a result, this wine shows the austerity of young Barolo with vibrant fruit, deep color richness and lingering flavors of dark fruit and spice. Cascina Nuova is not technically a single-vineyard expression, but the folks at this winery treat it as if it were. – 93 points

2013 Barolo Ravera – This is a stunningly precise expression of Nebbiolo that shows exceptionally well in this vintage. The 2013 Barolo Ravera benefits from slightly higher altitudes that help to develop the singular linearity and focus of the wine. If many other celebrated crus, such as Cannubi and Brunate, exist at 250 to 350 meters, Ravera starts at 380 meters. That higher positioning means that fruit is harvested as much as ten days after the other sites. This wine offers a savory vein with iron and pencil shaving. But it also fills out generously over the palate with dark fruit and spice. This Barolo promise a long aging future – 95 points

2012 Barolo Bricco Pernice Ravera – This wine is not labeled Riserva but it could be because it is released with an additional year of aging in both barrel and bottle. The 2012 Barolo Ravera Bricco Pernice is a dark and velvety wine with a broad aromatic reach. Compared to 2013, this vintage is less successful, in my mind, when it comes to clarity and aromatic focus. This wine shows less depth as a result. The bouquet is powerful and broad with black fruit, prune and dark spice. The finish shows weight and concentration. – 93 points

2011 Barolo Vigna Elena Ravera – The 2011 Barolo Riserva Vigna Elena is a pure expression of the Rosé clone, a subvariety of Nebbiolo that is seeing a small but steady upswing in popularity. This wine is only made in the best vintages and it was not produced in 2008 or 2002. It probably will not appear in 2014 either, I’m told. But the 2011 vintage is well worth your attention. This is a deep and brooding wine that carries its extra weight and volume with the grace of a classic ballet dancer. There is ample power and determination here that will undoubtedly carry the wine forward in its aging trajectory. – 95 points