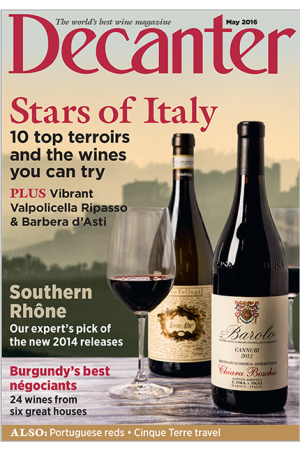 Michaela Morris explores the essence of the Ravera cru with Elvio Cogno owner Valter Fissore and a tasting of vintages from 2004 to 2012,

2004’s growing season was sunny and dry without extremes of heat, allowing for gradual, uniform ripening. Harvest at Cogno began in mid-October. Fissore calls this a transitional year as he started to phase out partial ageing in used barriques. Notes of iron, undergrowth and anise offset pruney aromas, while on the palate slightly aggressive tannins dominate. This doesn’t quite have the balance of structure and elegance so deftly achieved in more recent vintages. Drinking Window 2018 – 2023

The challenge in 2005 was deciding when to pick. Inclement weather throughout the summer and leading up to harvest made full ripeness a struggle. Cogno’s Ravera was brought in just before the heavy rains in early October. It’s the first vintage aged exclusively in large botti, relatively delicate and less commanding in structure than the rest of the lineup, though lovely dried rose petal and cherry notes are supported by juicy acidity. Drinking Window 2018 – 2025

Like 2004 and 2010, 2006 is regarded as an excellent, ageworthy vintage. Though initially hot, temperatures dropped substantially in August leading to a long, regulated ripening period. Cogno’s Ravera was harvested on 3rd October. It seems to be in an awkward phase at present, without sufficient energy for the long-haul. While the palate is still very austere, with tightly-wound tannins suggesting further ageing is required, developed nuances of soy and leather prevail. Drinking Window 2018 – 2026

An easier year, conditions in 2007 were similar to 2011. The summer was dry and Ravera did not suffer from excesses of temperature, thanks to the ventilating winds that characterise this site. Deemed precocious and flamboyant rather than a classic vintage, at 10 years old this is in such a beautiful drinking window. Gorgeous scents of balsam and smoky tea meet luscious black raspberry on the silky, yet still firm palate. Drinking Window 2018 – 2030

The challenging 2008 vintage was cool and humid throughout spring and summer, but a long, dry autumn allowed for slow, steady ripening. As hail damage reduced yields in Cogno’s Vigna Elena, Fissore blended what remained into the Ravera rather than bottling it separately. The result is a taut and graceful package. Extraordinarily expressive, the nose offers dried lavender, sage and tar with persistent minerality, tobacco and black pepper on the palate. Drinking Window 2018 – 2034

Fissore admits that 2009 was not an easy vintage. Besides some hail damage early on, the dry and hot summer culminated in uneven ripening in early October. Despite this, Cogno’s Ravera bottling does not exhibit overripe flavours, nor the green tannins that mark some of its peers. While it may not have the sheer depth and longevity of its immediate siblings, it is round, well-framed and characterised by black cherry, thyme and sweet spice. Drinking Window 2018 – 2028

The highly revered 2010 vintage saw moderate temperatures with marked diurnal differences here, leading to a harvest of ripe, healthy fruit in mid-October. This is also the year Fissore introduced organic practices in his vineyards. Still fresh and youthful, it demonstrates exceptional focus of mint, forest herbs and rose. It’s a powerfully structured thoroughbred with succulent acidity that lifts and carries the wine to a long, savoury finish. This is brilliantly proportioned and stately. Drinking Window 2020 – 2040

The hot 2011 vintage was one of the winery’s earliest harvests (28 September) after the torrid 2003. Fissore increased the maceration time to 45 days, and has continued to do so in subsequent years. Whereas 2013, 2012 and 2010 show the austerity associated with Ravera, the 2011 has a sumptuous openness of liquorice, violets and ripe cherry, making it immediately appealing. Nevertheless, it still possesses substantial backbone for ageing. Drinking Window 2018 – 2033

A cooler year overall, 2012 presented a variety of challenges. Heavy rains at flowering resulted in poor fruit set, reducing yields. Cogno’s vineyards were spared the hail that struck nearby sites and also avoided summer temperature spikes. There is lovely purity and precision here, with hints of strawberry and cinnamon buried under seductive earth and truffle nuances. It’s crunchy and elegant, yet sneaky in its concentration and layers of tannin. Drinking Window 2021 – 2039