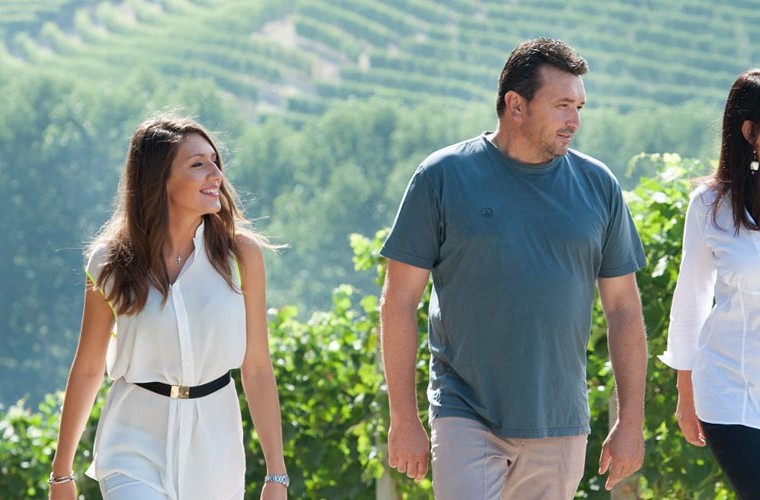 Elvio Cogno was 60 years old when he decided to start from zero. He rolled up his sleeves and began reconstruction work on the farmhouse. After acquiring the vineyards in Ravera, he began to experiment.

These were very difficult but heroic years; the work seemed infinite, yet so did the passion.

Alongside Elvio Cogno, his daughter Nadia and her husband Valter Fissore worked together, soon to enter in the business.

The Cogno production philosophy is traditional, which includes long fermentation and aging in large barrels. Their relationship with the earth, however, is innovative. They seek to understand the depths of that elusive concept of terroir, strengthening the rapport between viticulturists, vines, earth, and environment — a mix of factors that is translated into elegant, smooth, and characteristic wines.

The first nebbiolo harvest was in 1991. The wine entered the market four years later labeled as Barolo Ravera. It was the first bottle to carry the name of the vineyard and terroir, known as the menzione geografica, on its label, a practice that would not be regulated until years later.

With the vision of a dreamer and a pinch of recklessness, Cogno began to replant the vines. In 1991, Vigna Elena (named after the daughter of Nadia and Valter) was produced from a nebbiolo clone called «Rosé», noted for its subtle, fragrant aromas and light color. It was a risky choice, criticized by many; but over time, it earned prestige.

Today, Vigna Elena is the apple of Elvio Cogno’s eye, the most appreciated Barolo for its distinctive characteristics.