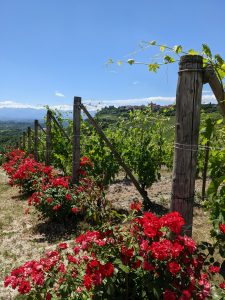 If we had to choose an adjective for describing and summarizing the 2022 season, our choice would obviously be “exceptional”.

Winter was exceptional, either for absolute scarcity of rain and snow, and for mild temperatures that characterized the month of February.

Summer was exceptional, due to earliness, drought and with record-breaking temperatures.

Exceptional – this time in the meaning of “amazing” – are the wines that have been produced during this unusual and extreme season. Yes, because despite the premises that kept us on the edge of our seats for several weeks, all new wines are giving good (and unexpected) results and are proving to be endowed with great character and harmony.

Without a doubt, 2022 was a difficult year for us winemakers, who had to work carefully and in a very targeted way both in the vineyard and in the cellar. In fact, the prolonged period of drought and high temperatures caused a slowdown in vegetative growth, which was very variable depending on the different plots. Without too many surprises, vines that suffered less and that had a regular and homogeneous growth were those with east and northeast exposure.

Besides binding to provide protection to the plants, it was also necessary to work the soil more than usual given the compactness due to the scarcity of rain and snow, in order to facilitate the absorption of rainwater. 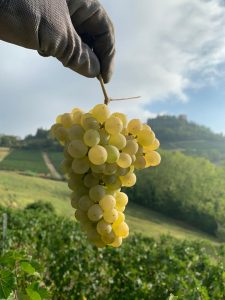 Because of this climatic trend, harvest was about 15 days earlier compared to the average and the yield was lower, even by 20%. Despite this, at the time of harvest, grapes were healthy and beautiful; a scenario that we would have never expected a few weeks before.

Certainly, the experience gained over the years was fundamental to face this difficult season, but, on the other hand, nature, with its wonderful and unstoppable strength, has been a decisive ally for us winemakers during the most critical phases of the growing season. In fact, vines managed to deal with severe drought thanks to the ability to self-regulate depending on the water reserves available in the soil.

Fertilization of the vineyards

At the end of the harvest, it was essential to fertilize the vineyards, in particular the poorer ones. Good weather conditions allowed us to easily carry out this operation during last fall, during which we spread organic fertilizer made of earthworm humus.

Lastly, talking about the activities put in place to defend plants from vine diseases, given the mediocre results obtained so far, we decided to start an experimental path that involves endotherapy treatment, with the aim of saving plants affected by Esca disease and flavescence dorée.