A new harvest is just around the corner and, even if the coming weeks will be the most important for the quality of the grapes, we can start reflecting on the general progress of the first part of the growing season.

Before the “last mile”

It is useless to deny that the weather conditions of this season have proved to be quite tricky. After a particularly dry winter, vineyards had to deal with a summer characterized by high temperatures and low rainfall.

In fact, since the beginning of June, we have witnessed an advance of summer, with a rise in daily temperatures. The heat continued throughout the month of July due to the presence of the African Anticyclone that affected the area during the two middle weeks, thus contributing to accentuate the water stress of the vines.

Summer rainfall was rather scarce and mostly concentrated during the last days of July. Despite this, the last rain showers were fundamental to limit the effects of the prolonged period of drought and have led to an acceleration of the ripening and veraison processes, in particular of the early-ripening grape varieties.

Despite the heat and drought, given the healthiness and the state of ripeness of the grapes, we are inclined to assume that, in the absence of major changes, the production will be good, but slightly reduced and that the harvest will be anticipated only by a few days than the average of other vintages.

Work in the vineyard 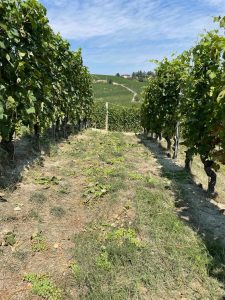 After training upward and topping vines in June, some considerations came to mind before starting the thinning, which was carried out during the second week of July.

Methods and timing of thinning should always be carefully evaluated, especially in these weather conditions.

In case of water stress, it is important to reduce production. However, we must be careful to do not exceed, as the remaining bunches could develop in an unbalanced way, either in presence of abundant rains or new heat waves.

Therefore, it was fundamental to act in a targeted and focused manner, assessing needs of each vineyard.