Walking through our Ravera rows, we get excited about the beginning of a new budding phase, a symbol of rebirth and full of new hopes, and we let ourselves be overwhelmed by the beauty of the vineyards during the spring season. 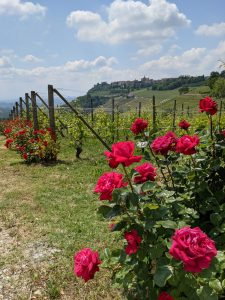 We have witnessed a significant drop of the temperature during the first nights of April, but, despite the inclement weather, the young sprouts haven’t suffered damage due to frosts.

The work in the vineyard resumed in full swing with the arrival of spring. At the end of April our team performed the bedding of vine shoots, which have benefited by spring rains. Then we worked to manage our rows, mechanically cutting the aerial part of the spontaneous vegetation growing in the vineyards.

The steady wind that blew through our vineyards during the second half of the spring caused a fast evaporation of water from soil. The situation has been restored due to rainfall and the drop in wind during the first part of the summer.

The beginning of summer

The months of June and July were characterized by mild temperatures and strong temperature changes between day and night, which favored the vegetative growing of the vines. Due to this situation, it became necessary to manage the vigor of the plants by means of tying and topping activities.
The temperature started to rise only after the second half of July, and the beautiful summer days have alternated with thunderstorms and rain which didn’t cause any damage to our beautiful plants.